I have been learning about icons over on the Cathedral of the Isles under the gentle guidance of Tatiana and I will never look at an icon in the same way again.

I was not learning about a particular icon, its symbolism and history, nor indeed about the symbolism and history behind all icons, but rather I have embarked on a voyage through making an icon.  In that voyage I learnt more about icons than I would have imagined.  It was a voyage of discovery, which is still gifting new vistas.  It was far more spiritually and emotional challenging than I had imagined it might have been and through the experience icons themselves have become something more than they once were.  Icons will, for me,  no longer be something to look through but something to step through.  They are now a doorway to go beyond, rather than a window to peer through remaining an onlooker.

The process itself has multiple stages even before you think about making a mark, until you have aboard with multiple layers of gesso akin to unglazed fine bone china, later on this surface is transformed into what I can only best describe as a white ceramic tile, smooth, shiny and mirror like, but that is another half a dozen more steps down the line.  The repetitive, and on the face of it boring nature, of this part of the process slowly became very meditative and it was at this point the enormity of what was going on first struck me.  These natural materials were slowly becoming something bigger than the sum of their parts.  In the repetition mystery was fading in and out of that cloud of unknowing, an item wasn’t being made, a pathway to God was being intricately woven.  Like a thunderbolt I found myself thinking on that seamless robe Jesus wore.  There was no beginning, no end, no joins, although this was still the preparation stage it was also a becoming, none of this would be seen, but all of it would add to the finished icon, I found myself no longer reflecting on Jesus’ robe, but rather Paul’s passage on the varying members in the body of Christ.  I slipped into prayer, situations and people.  I have experienced this kind of prayer creeping up on me while I have been painting before, so in one sense maybe I shouldn’t have been surprised, but I was.  Icons once finished help concentrate and focus ones prayers, but here it was as if the prayer was becoming part of the icon itself.  Words can not explain it, just as they can’t explain a particular shade of blue to someone who has never had sight.  All this work, all this prayer and the image of the icon is not even yet on the board.  It feels almost wrong when you reach the stage of scratching this well prepared surface with the bones of the image but that is what must be done, before the area to be gold is prepared yet further into that ceramic tile stage I mentioned earlier.  After waiting for the size to cure it finally becomes time to add the gold leaf and the icon begins to take on a physical presence.

From the moment the size of the board has been chosen that board became the icon, all the work done will never be seen again, but it will reflect in the finished icon.  An icon is about more than the image and even at this stage I started to doubt if the copy paper icons so numerous these days can really be called an icon, I certainly will see them in a very different light from now on.  Just as some churches ooze prayer so too, even at this stage, did those blank icons.  A final couple of coats of shellac and it was ready for the paint.  At this point it became clear that there were those for whom this was an artistic exercise and those for whom it was a spiritual one.  I was not alone in being somewhat overwhelmed by what was expected from us.  We didn’t want to make an error, not through vanity or artistic merit but through a sense of not wanting to destroy the precious nature of what the Holy Spirit was creating through us.  You start by painting blocks of colour almost like painting by numbers, the paint used was high quality pigment mixed with fresh egg tempera, we felt like alchemists weaving prayers and mystery into the emerging icon.  I was overwhelmed by the intensity of it all, deep feelings of being unworthy washed over me.  I ran and hid from an unfinished icon like Jonah ran from God feeling overwhelmed by what was being asked of him.

While the preparation was a surprisingly meditative affair the painting was surprisingly the opposite.  Just like sometimes our prayers are easy and refresh us while at other they exhaust and tire us as we, like Jacob wrestling with God.  Within that wrestling hope finally burns through and the essence of the icon takes on a new quality just as its visual presence does.  While I didn’t have to go through a shipwreck and a journey in the belly of a big fish I too ended up back where I was supposed to be sitting in front of an unfinished icon, still feeling that someone else would make a better job of it but accepting that this was a task set before me and so I had to trust that God – and Tatiana – would help me through it which indeed both did.  Suddenly the gold which seemed to shout begins to gently glow in the background a reminder that the glory of God is always around not just in the moments of the Burning Bush.  The colours while telling their story of the person portrayed, also reflect the loving properties of God, the dabs of paint like jewels become the priceless treasures of the Holy Spirit.  The person portrayed – if they are not Christ – becomes lesser as stepping through the things of earth you come face to face with God.  For me the most fascinating thing was while with pictures of the saints it was up to us to step through, with images of Christ there was a sense of being pulled through into an embrace.

There are prayers to say as you begin to work on an icon and when the icon is finally finished more prayers are said as it is blessed.  For some that might become the time when it mystically becomes holy, yet I think not.  That maybe the time when the recognition of its holiness is acknowledged but God has already been at work. God has already blessed the patience and care, the dreams and prayers, the weaknesses and the strengths which produced – not a work of art, not a item of idolatry, but rather a declaration of faith and hope and love, a doorway to step through and meet with God. 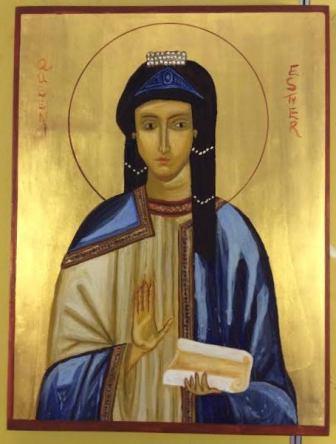 I have long looked on icons as a way of telling stories, a way of entering into the things God wishes to teach us, a way to help our prayer life, a way to find hope when all seems hopeless.  I have read much about the symbols contained within them and the history of them, but until going through this process of birthing one I didn’t truly understand.  I had chosen Esther for my icon, mainly because I had wanted to do an Old Testament figure as you so rarely see them portrayed yet they too can encourage us in our faith.  Initially I had thought I might paint either Ruth or Jacob and his ladder, but I was guided to Esther and I am glad.

I was there with 10 others and here are all the icons on the altar after being blessed at the end of the week.

From left to right they are:-  Theotokos (an absolutely beautiful icon which unfortunately has caught the light and isn’t very clear here) – Paraschiva of Iaşi – Julian of Norwich – Edessa – Queen Esther – Gabriel – St Margaret of Scotland – Julian of Norwich (again) – Christ – Mary of Magdala – The Good Shepherd.

I would like to try and birth another icon once have gathered the myriad of materials needed, perhaps another Old Testament figure or maybe the Annunciation, we shall see.

Please leave a comment if you wish. Cancel reply

This site uses Akismet to reduce spam. Learn how your comment data is processed.